Florida State College at Jacksonville created an #IAmAnImmigrant poster campaign during 2018 Hispanic Heritage month. Posters highlighted several students, faculty, and staff that immigrate to the US.

I immigrated from Venezuela in 1994 and became #AmericanByChoice in 2006. One of the big responsibilities as US citizen is to vote in local, state, and federal elections. Thanks to FSCJ for the opportunity of sharing our stories to educate our students and future managers and leaders. 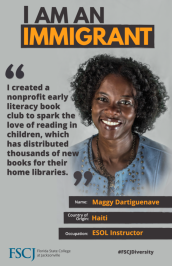 Each week on Making a Difference, Mike White interviews community leaders in Jacksonville. This week Mike spoke to Dr. Jose G. Lepervanche, a Scouter, from FSCJ.

Mike White launched Client Focused Media in 2002, the leading integrated marketing firm in Northeast Florida with extensive capabilities and experience providing strategic planning, marketing, creative, advertising, printing, branding, public relations and crisis communications services. He also serves as the Publisher of Jacksonville Buzz Magazine which reaches 150,000 readers each month and is the CEO of Bluhorn Solutions. Because of White’s commitment to provide the broadest range of integrated marketing services possible for CFM’s clients, he also founded an events production company as well as a promotional product company to support CFM’s cutting edge marketing campaigns and to yield measurable results for CFM clients at the most efficient rates.

Dr. Jose G. Lepervanche: “Scouting shaped me as a young sea scout in Venezuela to be a Navy Officer and a global citizen. As the son of a widow, my Sea Scout group activities and camping and leaders were the roles models who guided me as a person and as a professional. I was part of a worldwide movement that is still impacting me. I became Scouter in Venezuela and later in the USA. The values I learned and the role models I followed were fundamental to do the same. Leading by example is my commitment to Scouting as a person, professional, and professor. Scouting is the best outdoors experiential educational method to form the leaders of tomorrow.”

To contact Dr. Jose, shoot him an email at joselepervanche@gmail.com

Both TEDxFSCJ videos were delivered in our FSCJ stage. Both touch diversity and discrimination issues. Watch both videos and summarize the points that impact your way of thinking. What similar cases have you found in your workplace? How is your company/organization dealing with this type of cases?

As a lifelong video gamer, Marq Mervin had always dreamed of working in computer animation, but as he entered his senior year of college, he began to despair for one simple reason: no one in the industry looked like him. Eventually Mervin found a mentor who, as a person of color, inspired him not only to believe in himself, but to believe in the unfinished fight for diversity in fine arts education. Like a sumptuous meal still lacking its full range of spices, American arts education will lack its signature flavor until we embrace the full diversity of our people. Marq Mervin is a graphic designer and CG artist focusing on visual identity/branding, animation and digital illustration. He has over seven years of experience as a professional artist, developing animations and graphics for clients such as WJXT Channel 4 and several start-up businesses. Mervin holds a Master’s of Fine Arts in Computer Graphics from New York Institute of Technology, as well as a Bachelor’s of Fine Arts in Animation from Jacksonville University. A native of Jacksonville, Marq is a passionate advocate for developing young artists in his hometown.

As a college student, activist, and community volunteer, Luis is working to change our perspective on the undocumented immigrant youth of this country. Luis Mejia is a student at FSCJ. Although he has lived in the United States for 17 years, he is originally from Mexico, and is one of the thousands of people who were granted Deferred Action for Childhood Arrival by President Obama’s direction to the U.S. Immigration and Customs Enforcement in 2012. Growing up between American and Mexican cultures, Luis has discovered how valuable an education is in each.

The 24th International Conference on College Teaching and Learning will be held April 8-12, 2013, at the beautiful Sawgrass Marriott Golf Resort & Spa in Ponte Vedra Beach, Florida.

The Web is an additional medium used by major TV cable news networks to expand and complement the dissemination of international, national, local, or other news that help users improve their knowledge and make informed professional and personal decisions. News websites provides an excellent way to present news to users who are willing to accept this technology and perceive that it is useful and easy to use. News websites allow professors to bring current events to the classroom and to e-family leaders to bring current events to their e-family members in real time. (Read more)

Here is the flyer with two upcoming Business Club events for November. We will have free Donuts at the Small Business Administration event if you’d all like to stop by. Also, if you have students interested in the Bacardi event, please have them email Prof. Shawna Coram so she can get an idea of how many are coming.

“Life is a Continuous Learning Adventure”